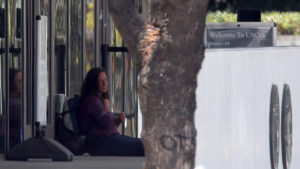 On May 20th a woman was detained on the steps of a Federal Building after telling authorities she had a bomb and triggering device. The LAPD dispatched the bomb squad and the SAWT team and a standoff ensued. A robot was dispatched to the scene and was used to deliver a phone to her but she was seen pointing and yelling at the police and pushed the phone away. The building contains a number of offices for a few federal agencies including Immigration, Homeland Security, and the IRS. The building and surrounding area were evacuated. The standoff started around 11:00 AM and ended about 2:00 PM.

The police eventually had to use force in the form of a beanbag shotgun. The woman was found to have no bomb or any other explosive device and was taken away in an ambulance. There were no details about what if anything she had been agitated about. It seems she will be facing numerous State and Federal charges and the threat to a building housing an office for Homeland Security could possibly be highlighted by authorities. There has been an increase in false claims by people made to police to get a SAWT team sent to a crime supposed crime scene. However, this does not appear to be an example of what has become known as “Swatting”. Early evidence seems to point to a mental issue of some type. Still this woman will be facing serious criminal charges and she will need an attorney to assist her.

At the Law Offices of Arash Hashemi, we provide clients with passionate and experienced representation. If you have been charged with a serious crime, such as making a bomb threat, and would like to schedule an initial consultation with a lawyer at our firm, contact us by phone at (310) 894-8548 or contact us online. We promptly return phone calls and emails. Our office is conveniently located in the Westside Towers in West Los Angeles, within minutes of Santa Monica, Beverly Hills, and Westwood. We have flexible and weekend office hours, and we will visit you in jail to discuss your case.