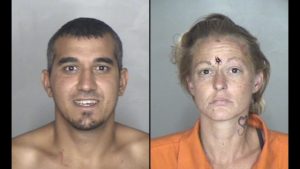 The summer of 2018 saw the worst start to the summer fire season in 10 years. California was yet again undertaking a record-breaking fight against flames engulfing the state. Over 500 square miles burned in various counties, including the Carr Fire in Shatsta County, the Ferguson Fire near Yosemite National Park, and several other fires dotting the state including few flare ups in Los Angeles County.

The unpredictable flames ripped through communities and forests alike- but as thousands of firefighters put their lives on the line to quench the flames, the last thing they expect is to watch one of their engines drive away in the middle of a battle.

On July 14, 2018, a new level of unpredictability happened. What seemed like an exaggerated stunt scripted in a comedic Hollywood thriller- a firetruck was in fact stolen from firefighters that were battling a blaze near Sacramento, CA

29-year-old David Virgil Carcalete hopped into the young childhood dreams of many- and sped away in a big red firetruck that would make the 2018 fire season an extra memorable one. Along the way he picked up his friend, Candace Lee Scollard, to share in all the thrills of dominating the road in a one million dollar ride.

This Bonnie and Clyde style chase ended with the severely damaged truck in a ditch nearly 100 miles away on a route that spanned 4 counties from where firefighters had originally parked the emergency vehicle. However, there is nothing thrilling about the felony charges Mr. Carcalete will face including vehicle theft, felony reckless evading, and possession of stolen special equipment.

Although it seems like the female passenger Candace Lee Scollard was just ‘along for the ride’- choosing your friends oftentimes leads to choosing your legal fate. Her participation in the short lived fun has landed her the exact same charges.

If you or someone you know has been falsely charged with a vehicle theft, contact us 24 hours a day at (310) 448-1529 or contact us online to schedule a consultation. Our office is conveniently located in the Westside Towers in Los Angeles, within minutes of Santa Monica, Beverly Hills, Westwood, and steps away from the Expo/Bundy Station. We have flexible hours and weekend appointments, and we will visit you in jail to discuss your case.