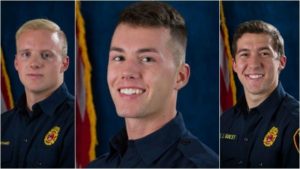 Georgia Firefighter, Ron Herens, was killed on May 1, 2017, and his two companions were hurt while on vacation in Los Angeles.  Suspect Benjamin Seider was driving while under the influence of alcohol when he ran a red light at the intersection of Washington Boulevard and Ocean Avenue in Venice, crashing into Herens’ vehicle. The force propelled Herens from the car and he was pronounced dead at the scene. The other two passengers in Herens’ vehicle suffered serious injuries.

California Penal Code 191.5 (b) states that the crime of vehicular manslaughter while intoxicated occurs when:

This can be charged as either a misdemeanor or felony. Because Seider is charged with a felony he could face up to 4 years in prison, with an added sentence of up to 6 years if any victims suffered serious bodily injuries (and an additional 1 year sentence for each person that suffers any injury). He could also be charged up to $5,000 in fines, 18 or 30 months of a court approved DUI class, Habitual Traffic Offender status for three years, and a 5 year revocation of his license. Seider may also end up with “strike” on his record if anybody other than himself suffered serious bodily injury.

In California, VC 23152 (b) makes it illegal for a person to drive with a blood alcohol content over 0.08% by weight. In order to convict someone of this crime, the prosecutor must prove that:

Seider is facing some serious charges and if he is convicted of all charges, he could face more than 12 years in State prison. If you have been charged with a DUI and/or Vehicular Manslaughter you can contact us by phone at (310) 448-1529 or contact us online for a consultation. We promptly return phone calls and emails. Our office is conveniently located in the Westside Towers in Los Angeles, within minutes of Santa Monica, Beverly Hills, Westwood, and steps away from the Expo/Bundy Station. We have flexible and weekend office hours, and we will visit you in jail to discuss your case.