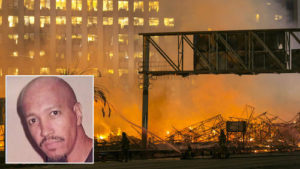 The man arrested for the arson of the unfinished Da Vinci apartments in Los Angeles was denied a reduction in bail. Judge Upinder Kalra ruled in favor of the prosecution, who argued against the reduction on June 11, 2015. The suspect, Dawud Abdulwali, is said to have traveled out of the country a number of times and the prosecutors argued this meant he was a flight risk. His attorney volunteered to turn in his passport but ultimately his request to have the bail decreased was denied.

Mr. Abdulwali’s attorney believes the arson case is based on circumstantial evidence alone. The police have some surveillance tapes showing a man getting out of a taxi on two different occasions slipping into the building and then returning to the cab. There are flames flickering in the second tape they reviewed. However, Abdulwali has no connection to the Da Vinci apartments at all.

The suspect did have a taxi registered in his name at the time of the arson. The city, however, has no record of him having a taxi driver license. The price for the arson could go as high as $ 10 million and fortunately no one was injured. The man charged had no financial stake in the building which may or may not help his defense attorney. However, the prosecutors seem confident about their camera footage evidence.

At the Law Offices of Arash Hashemi, we provide clients with passionate and experienced representation. If you have been charged with arson or any other crime and would like to schedule an initial consultation with a lawyer at our firm, contact us by phone at (310) 894-8548 or contact us online. We promptly return phone calls and emails. Our office is conveniently located in the Westside Towers in West Los Angeles, within minutes of Santa Monica, Beverly Hills, and Westwood. We have flexible and weekend office hours, and we will visit you in jail to discuss your case.