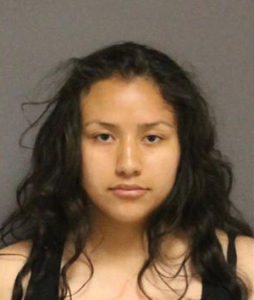 On March 10, 2015, four different drivers were confronted by a woman of similar description and two of them had their cars stolen by her in Tustin, California. The first victim had her doors locked and windows closed and the suspect couldn’t take the vehicle. ABC Eyewitness news reported that after the first attempted carjacking the woman, who was armed with a knife, went to a second car where she was able to gain entry to a Volvo and she drove it away leaving the owner at the scene unharmed.

She soon stopped and left that car but moved on to a Prius and smashed the window with the knife and was able to steal that car too. Then she again deserted the stolen Prius and tried to steal a woman’s truck. This driver was able to fend off her attempts to steal the car and the suspect moved on after people came to the driver’s aid. She was reported as having non-life threatening injuries at that time.

On March 12, 2015, the police arrested the suspect as a result of DNA evidence found in the cars. The woman charged is identified as Jocelyn Cano of Santa Ana, California. She has a criminal record, which is why her DNA was on file with authorities. It would have served her better to turn herself in to authorities with the help of a California criminal defense attorney.

A person who gets involved in a crime and has not been arrested may get in front of the trouble by meeting with an attorney and discussing the best option for their next move. This person should have figured out that the DNA on file would see her caught and it may now be too late for any leniency. An experienced defense attorney would have been able to remind her of the DNA on file and could have helped her bring about a better conclusion to this case than facing an arrest and arraignment on her own.

At the Law Offices of Arash Hashemi, we provide clients with passionate and experienced representation. If you have been charged with car jacking or any other crime and would like to schedule an initial consultation with a lawyer at our firm, contact us by phone at (310) 894-8548 or contact us online. We promptly return phone calls and emails. Our office is conveniently located in the Westside Towers in West Los Angeles, within minutes of Santa Monica, Beverly Hills, and Westwood. We have flexible and weekend office hours, and we will visit you in jail to discuss your case.