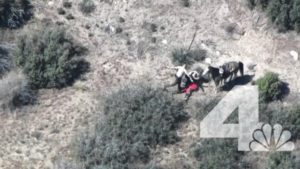 The L.A. Times reported that a San Bernardino man, who had been beaten  by Sheriff’s Deputies after a horse pursuit, has been charged with multiple crimes. Mr. Francis Pusock had received $650,000 from the county of San Bernardino a week after the beating, which was caught on film by a news helicopter. The dollar amount was a result of a settlement and to prevent any further action against the county connected as a result of the beating. The District Attorney alleges Pusock was on a horse which was stolen. He has been released on $100,000 bail.

Pusock was pursued by deputies after fleeing the scene in an attempt to serve a search warrant. He allegedly stole three different vehicles, the horse beside escaping from the police. He is being charged with resisting arrest, evading a police officer, receiving stolen property, reckless driving, possession of methamphetamine and possession of marijuana. The arresting officers are on administrative leave while their behavior during the arrest is looked into by the D.A.’s office and the F.B.I., who have are now involved to see f there were any civil rights violation investigation.

An attorney for the defense will have a lot of charges to handle and an experienced California defense attorney will be necessary for this man’s court appearance. The list of crimes, though not violent, is still difficult to answer for – especially the vehicle thefts and reckless driving which could have put people in danger. An experience attorney can sift through the evidence and determine how much is relevant and able to be proven. This would give the accused the best possible chance of reducing any sentence he may have to perform if convicted.

At the Law Offices of Arash Hashemi, we provide clients with passionate and experienced representation. If you have been charged with a serious crime and would like to schedule an initial consultation with a lawyer at our firm, contact us by phone at (310) 894-8548 or contact us online. We promptly return phone calls and emails. Our office is conveniently located in the Westside Towers in West Los Angeles, within minutes of Santa Monica, Beverly Hills, and Westwood. We have flexible and weekend office hours, and we will visit you in jail to discuss your case.