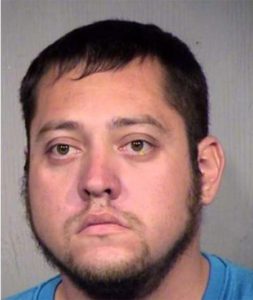 Not every crime is common, and it seems that every day we hear of new ways our fellow man has pushed the limits of ‘law abiding citizen’ into a ‘creative’ criminal. It has been said that loneliness makes one do things out of desperation, and for one Arizona man, his desperate and dark sexual impulses have landed him into a heap of legal trouble.

In September of 2018, thirty-year-old Paul Anthony Menchaca was arrested on suspicion of felony fraud as he impersonated a ‘lifestyle of disability’ by duping professional caregivers he had Down Syndrome in order to manipulate them into changing his adult diapers as well as bathing him.

However, it wasn’t quite adding up after complaints were made by his caregivers stating that he had repeatedly made aggressive demands that his genitals needed to be cleaned more thoroughly. Additionally, the primary caregiver “Amy” had requested that Menchaca be punished if he soiled his diapers or ‘misbehaved’ in any way. Adding to suspicion, not one of the three caregivers had ever met Amy in person. She only communicated and coordinated care through text, and left cash for prompt payment of service.

After a month-long investigation into the case, it was determined that Amy was a false persona made up by Menchaca to make his devious scheme a plausible reality. Authorities traced Amy’s cell phone number back to Menchaca.

To make matters worse, Paul Menchaca was a teacher’s aid at the local junior high school in Gilbert, Arizona. Though it has been made clear that none of the children were involved or harmed, his spotless reputation as well as clean criminal history have been tainted forever.

Had this crime been committed in California, Menchaca might been charged with violating Penal Code §529 (False Impersonation). Menchaca would face up to 3 years in jail and/or a $10,000 fine depending. Even though the cleaning and touching of his genitals was part of the caregiver’s job, he was in no need of any such care and was fully capable of taking care of his own hygienic needs. Therefore, he could additionally face Sexual Battery charges under Penal Code §243.4

If you or someone you know has been charged with a crime, contact us 24 hours a day at (310) 448-1529 or contact us online to schedule a consultation. Our office is conveniently located in the Westside Towers in Los Angeles, within minutes of Santa Monica, Beverly Hills, Westwood, and steps away from the Expo/Bundy Station. We have flexible hours and weekend appointments, and we will visit you in jail to discuss your case.