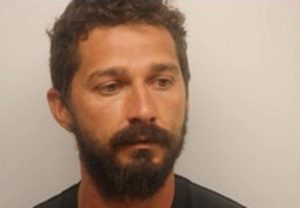 Actor Shia LeBeouf spent Saturday, July 8, 2017, in jail in Savannah, Georgia. He was arrested on charges of obstruction, disorderly conduct, and public intoxication. LeBeouf and his beard were taken into custody early Saturday morning and released on $7,000 bond.

According to authorities, LeBeouf approached a person asking for a cigarette while a nearby police officer observed. When he was not given the cigarette, he began using profane language and acting disorderly. The officer approached LeBeouf and asked him to leave, to which LeBeouf refused and became aggressive toward the officer. LeBeouf then fled from the officer to a nearby hotel and was later arrested in the hotel lobby.

This is not LeBeouf’s first criminal conviction. The Transformers star was previously arrested in 2015, also for public intoxication, following a DUI arrest in 2008.

Public intoxication refers to a person appearing in a public setting in an intoxicated state and being boisterous, loud, profane, and/or appearing in an indecent condition, or performing an indecent act. In Georgia, this is charged as a misdemeanor, and Shia can face penalties of up to $1,000, one year in jail, or both.
Keep in mind that simply being drunk in public is not a crime. In California, to be charged with the crime of public intoxication, a person must have displayed:

In California, the penalties for Penal Code 647 (f), or public intoxication, can include:

If a person is convicted of PC 647 (f) three or more times within a 12-month period, they will be sentenced to a minimum of 90 days in jail. This penalty can often be suspended by the court and swapped for completion a 60-day alcohol treatment program. As an alternative to criminal charges, police officers may instead take the person to an inebriation treatment facility (aka, the “drunk tank”) where the person can be held for up to 72 hours. This is also known as being held in “civil protective custody.”

A conviction of being drunk in public will go on your permanent criminal record and can greatly hurt your chances of future employment opportunities and advancements. If you or someone you know has been convicted on charges of being intoxicated in public, contact us 24 hours a day at (310) 448-1529 or contact us online to schedule a consultation. Our office is conveniently located in the Westside Towers in Los Angeles, within minutes of Santa Monica, Beverly Hills, Westwood, and steps away from the Expo/Bundy Station. We have flexible hours and weekend appointments, and we will visit you in jail to discuss your case.