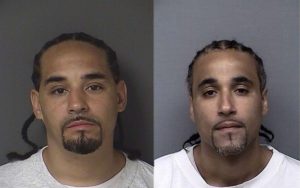 In May of 1999, Richard Jones was celebrating his girlfriend’s birthday at his home in Kansas City, Missouri. Meanwhile, another man who shared the same first name, Richard Amos, had stolen a woman’s phone outside of a Walmart in a nearby city. As it turns out, not only did the two share the same first name, but they had an uncanny resemblance to one another. Unfortunately, the victim had incorrectly identified Richard Jones as the perpetrator; Richard Amos’ doppelganger. Despite Jones’ truthful testimony that he had been at his home during the time of the robbery, authorities arrested and convicted the wrong Richard.

Throughout his time in prison, inmates had often mentioned to Jones that there was another prisoner who highly resembled him (Richard Amos). The two men’s lawyers decided to consider the case further, and discovered that the Richard Jones was in fact innocent.
On June 14, 2017, Jones’ lawyer presented the case to the Judge in Johnson County. When shown photos of the two men during the hearing, the victim of the robbery, Tamara Scherer, was unable to determine who of the two was the actual offender and stated, “I am no longer certain I identified the right person at the preliminary hearing and trial.” The charges against Jones were consequently dropped. After serving a 17-year sentence, Jones was finally released from prison on Wednesday, June 14, 2017. The true criminal, Richard Amos, will not be prosecuted because the statute of limitations for the crime has passed.

Robbery is defined as the crime of taking or attempting to take anything of value from someone by force, threat of force, or by inciting fear within that person. Though it varies by state, under California Penal Code Section 211, being convicted of robbery of the first degree can result in a sentence of up to 9 years and/or a fine of up to $10,000. Imprisonment sentences can be enhanced by up to 25 years or life if the robbery involved serious bodily injury, if multiple people were involved in the crime, and/ or the person used or discharged a firearm.

Being falsely convicted of a crime such as in Jones’ case can effectively ruin a person’s life. He will never get back the time he lost while in prison. Additionally, had Jones been convicted in California, under California Penal Code §4900 he would have been eligible to receive $140 per day of wrongful imprisonment throughout the 17 years in which he served time. Unfortunately for Jones, in the state of Kansas where he was convicted, there is no statute that offers compensation for wrongful conviction.

If you or someone you know has been falsely accused of committing the crime of robbery, contact us 24 hours a day at (310) 448-1529 or visit us online to schedule a consultation. Our office is conveniently located in the Westside Towers in Los Angeles, within minutes of Santa Monica, Beverly Hills, Westwood, and steps away from the Expo/Bundy Station. We have flexible hours and weekend appointments, and we will visit you in jail to discuss your case.