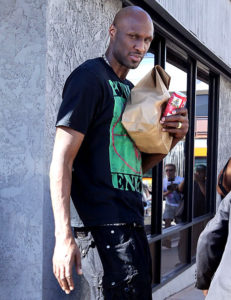 On October 13, 2015, former NBA player Lamar Odom, was rushed to a medical facility after being found unresponsive at a brothel in Nevada. It was reported that Odom had taken as many as 10 sexual-performance supplement pills and cocaine.

At a press conference, Sheriff Sharon Wehrly said two employees of the ranch confirmed Lamar Odom’s cocaine usage on Saturday, October 11, but were unsure if it had continued throughout the weekend.

Police said the sexual-performance supplements ingested by Lamar Odom were legal and were obtained from the ranch. Dennis Hof, the owner of the Love Ranch, claimed that the brothel did not offer supplements to its visitors.

Sheriff Wehrly said it was “distinctly possible” that Lamar Odom could face charges of drug possession pending the results of the investigation. She stated that the actions of Love Ranch employees would also be looked into.

The law regarding possession of drugs in Nevada is as follows:

“A person shall not knowingly or intentionally possess a controlled substance, unless the substance was obtained directly from, or pursuant to, a prescription …” (NRS 453.336)

Since cocaine is illegal and can not be prescribed by a doctor, possession of it is a crime. Clearly Lamar Odom had cocaine at one point. This can be proven by the fact that it was found in his system. However, is that enough evidence for Odom to be charged with a crime? Only time will tell.

At the Law Offices of Arash Hashemi, we provide clients with passionate and experienced representation. If you have been charged with drug possession or any other crime and would like to schedule an initial consultation with a lawyer at our firm, contact us by phone at (310) 448-1529 or contact us online. We promptly return phone calls and emails. Our office is conveniently located in the Westside Towers in West Los Angeles, within minutes of Santa Monica, Beverly Hills, and Westwood. We have flexible and weekend office hours, and we will visit you in jail to discuss your case.