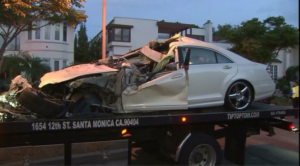 On May 9, 2015, CBS Los Angeles reported of a fatal accident involving a white Mercedes sedan and an Audi SUV in Beverly Hills. The two vehicles collided at Olympic Boulevard and Swall Drive around midnight and a passenger in the Mercedes was killed. No other serious injuries were reported but the other passengers did go to the hospital. The police are investigating why the Mercedes was traveling at such a high rate of speed in a residential neighborhood.

A witness was said to have told police that the Mercedes had been involved in a confrontation with a taxi cab earlier and had left the scene franticly. This is why there have been some mentions of the accident being related to road rage. Drugs and/or alcohol may have been a possible cause according to the police but no further comments were available and toxicology results take some time. The woman who died in the crash was a passenger and it is reported she was not wearing her seat belt.

When the case gets concluded there can be a lot of problems for the driver of the Mercedes. The high rate of speed, the possibility of road rage, and the potential charge of a DUI will be a lot to answer for. The death of the passenger may lead to a charge of involuntary manslaughter or some other serious offense. The person or persons responsible will need to consult with a California Defense attorney that has experience defending people facing multiple charges. This is the only way for the driver to get ahead of the state and offers the best chance at a minimum punishment if they are charged.

At the Law Offices of Arash Hashemi, we provide clients with passionate and experienced representation. If you have been charged with road rage or any other crime and would like to schedule an initial consultation with a lawyer at our firm, contact us by phone at (310) 894-8548 or contact us online. We promptly return phone calls and emails. Our office is conveniently located in the Westside Towers in West Los Angeles, within minutes of Santa Monica, Beverly Hills, and Westwood. We have flexible and weekend office hours, and we will visit you in jail to discuss your case.