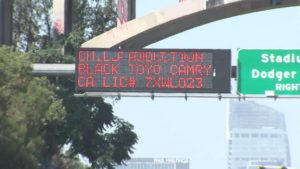 A woman has been sentenced to 60 days in jail for triggering a false Amber Alert. Charlene Gaston, a 26 year old from Los Angeles, plead no contest to one misdemeanor count of filing a false police report. According to Gaston, she was held at gunpoint and carjacked on July 6th, 2017, and that her stepson, Eric Coleman, was in the backseat at the time. Kandice Johnson, 31, was identified as the alleged suspect and was arrested the next day in San Bernardino. However, upon further investigation authorities discovered that Gaston had loaned the car to Johnson for a few days and Johnson had not yet returned the car on the agreed upon return date. Johnson had never actually carjacked Gaston and that Coleman was never in the back seat. Authorities believed she claimed her stepson was in the backseat because she thought this would speed up the process of getting her car returned by fabricating a more elaborate story. As a result, an Amber Alert was issued for Coleman whom she claimed had been kidnapped by Johnson.

LAPD Captain Shannon Paulson released this statement: “Those kinds of man-hours and that dedication of resources meant that other victims of true crimes, valid crimes, went without justice, or at least their justice was delayed.”
Interestingly, when Gaston was arrested on July 11, they discovered that she was already wanted for failing to appear in court for a restitution hearing regarding a 2015 conviction for auto theft.
In addition to the jail sentence, Gaston will be required to serve 36 months of probation, and pay a $220 fine.

In California, PC 148.5 makes filing a false police report of a misdemeanor or felony matter if reported to:

The penalties for falsely reporting a crime, if convicted as a misdemeanor, could result in up to six months in the county jail. When determining jail time, a judge will consider the offender’s criminal history, the motive for making the report, and how severe the consequences of the report were.
More specifically, VC 10501 makes it a separate crime to file a false auto theft report, as in Gaston’s case. This is classified as a misdemeanor. However, if this is not a person’s first offense, that crime would be considered a wobbler and may be charged as a felony.

Gaston purposefully reported a false crime- however many people are wrongfully charged with PC 148.5 despite the fact that they reported a crime in good faith. If you or someone you know has been falsely  charged with the crime of filing a false police report, contact us 24 hours a day at (310) 448-1529 or contact us online to schedule a consultation. Our office is conveniently located in the Westside Towers in Los Angeles, within minutes of Santa Monica, Beverly Hills, Westwood, and steps away from the Expo/Bundy Station. We have flexible hours and weekend appointments, and we will visit you in jail to discuss your case.