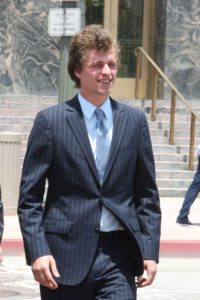 Hotel heir Conrad Hilton, Paris Hilton’s younger brother, plead not guilty to auto theft on Thursday, June 29th, 2017. The youngest Hilton was also charged with violating a restraining order against an ex-girlfriend when he attempted to take her father’s 2007 Bentley Continental. The 23-year-old was charged in early May with one felony count of driving or taking a vehicle without consent, two misdemeanor counts of violating a restraining order, and one count of contempt of court.
The incident occurred on May 7th, 2017, when police received a disturbance call in the 2300 block of Jupiter Drive. Officers found Hilton in the stolen Bentley before placing him in handcuffs.
This isn’t Hilton’s first encounter with law enforcement. Last June, he was sentenced to two months behind bars for testing positive for drugs, which violated the terms of his probation. The probation sentence was a result of a meltdown that had occurred last year on a British Airways flight from London to Los Angeles, where he was accused of assaulting two flight attendants and yelling that he was going to kill them, while calling passengers, “peasants”. He was restrained and handcuffed for the remainder of the flight. In a separate case, Hilton plead guilty to evading an arrest which led to a sentence of 90 days in sheriff’s custody.
In the present case, Hilton was released from jail on May 10th and taken to a psychiatric treatment center in Texas. He has since then completed treatment and has taken medication that has been “very, very effective,” according to his attorney, Robert Shapiro. Hilton is due back in court in August, alongside co-defendant William James Bell, who was charged with one felony count of driving or taking a vehicle without consent. Bell could face up to 3 years in prison, while Hilton could face up to 4.
California PC 273.6 makes it a crime to violate the terms of a restraining order. The consequences for violation of a restraining order can vary greatly. Still, in most states violation of a restraining order is charged as a misdemeanor with fines that can reach up to $5,000 and up to a year in jail. Often, penalties of a restraining order depend on whether:

If charged as a felony, a person can spend up to three years in California State Prison for violation of a restraining order (one year in county jail for a misdemeanor charge). Additionally, a person may be responsible for victim restitution- including any counseling or therapy that was reasonably incurred by the victim.
California PC 166 Contempt of Court is a broader law that punishes a person for a variety of conduct that falls under the category of disobeying a judge’s orders or acting inappropriately in court. Generally, a person charged with Contempt of Court will be charged with a misdemeanor that is punishable with up to 6 months in jail and a maximum of up to a $1,000 fine.
In Hilton’s situation, he will face more serious penalties because this was an “aggravated” offense, which simply means that other acts involved have elevated the penalties. The fact that Hilton violated a restraining order in addition to stealing a vehicle means that he will face a higher fine for violating PC 166, up to one year in county jail, and/or a potential state prison sentence.

If you or someone you know has been charged with violation of a restraining order, contact us 24 hours a day at (310) 448-1529 or contact us online to schedule a consultation. Our office is conveniently located in the Westside Towers in Los Angeles, within minutes of Santa Monica, Beverly Hills, Westwood, and steps away from the Expo/Bundy Station. We have flexible hours and weekend appointments, and we will visit you in jail to discuss your case.