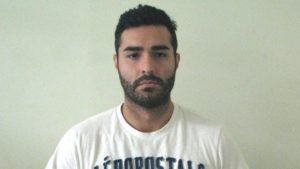 According to the L.A. Times, a former Los Angeles police officer who had fled the United States was found in Mexico and  transported back to face murder charges. Henry Solis had relatives in Mexico where he had been staying. Solis was fired by the LAPD when he was named a person of interest in the shooting death of Salome Rodriguez, Jr. Solis was off duty at the time of the crime and did not show up for work the next day. His car was found abandoned near the scene. The police in Pomona had been circulating a flier with a photo and information about the car while canvassing for any witnesses.

Henry Solis was arrested by Mexican authorities in Juarez and deported to Texas. California officials have extradited him and he will be charged with the murder of Salome Rodriguez, Jr. The confrontation with the victim happened in a bar where the two men fought. Solis chased after the man and allegedly shot him multiple times. Solis will also be facing other charges for leaving the scene and trying to avoid capture. His father Victor Solis was charged in Federal court in Texas for his role in helping Henry escape to Juarez. The father had told authorities he dropped Henry Solis off at a bus stop but video shows him entering Mexico with his son.

The case will be a high profile one due to the accused having been a police officer. Solis will be in need of an experienced Defense Attorney to handle his case. If the allegations are found to be true his defense counsel and the Los Angeles County Sheriffs will have to arrange for special custody arraignments due to the fact that Solis is an ex-police officer.

At the Law Offices of Arash Hashemi, we provide clients with passionate and experienced representation. If you have been charged with murder or any other serious crime and would like to schedule an initial consultation with a lawyer at our firm, contact us by phone at (310) 894-8548 or contact us online. We promptly return phone calls and emails. Our office is conveniently located in the Westside Towers in West Los Angeles, within minutes of Santa Monica, Beverly Hills, and Westwood. We have flexible and weekend office hours, and we will visit you in jail to discuss your case.