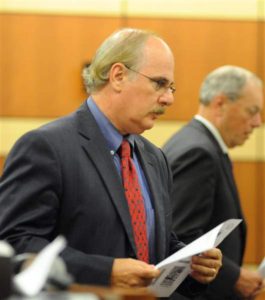 On September 12, 2016, Ohio lawyer Michael W. Fine pleaded guilty to hypnotizing six women with the intent of getting sexual gratification from them. He has agreed to permanent disbarment last year from the Ohio State Bar. Per the plea deal Fine will be sentenced to 12 years in State Prison.

One of Fine’s legal clients became suspicious of lost time she had experienced and because “she was wet in her vaginal area, that her bra was disheveled” after she left Fine’s office or had conversations with him. The woman approached the Sheffield police department, who initially suggested she find another attorney. Instead the woman recorded her dealings with Fine, including when he placed her in a hypnotic trance.

Per an emergency suspension motion filed by the Lorain County Bar Association, Fine told the client that she would have the “most massive, most incredible, most powerful whole body orgasm in your entire life,” that she was “being made love to by the world’s greatest lover” and not to cancel her next meeting with him.

The female client went back to the police with the recording. She agreed to wear audio and video recording device for her next meeting with Fine. After he hypnotized her again, police raided Fine’s office, that led to Fine’s arrest.

A second woman, who was Fine’s client in a dissolution proceeding, reported a similar experience with him. A family law judge also believes that she may have been one of Fine’s victims.

If you have been charged with crime and would like to know what is going to happen next download a Free copy of our book. You may also contact us by phone at (310) 448-1529 or contact us online for a consultation. We promptly return phone calls and emails. Our office is conveniently located in the Westside Towers in Los Angeles, within minutes of Santa Monica, Beverly Hills, and Westwood. We have flexible and weekend office hours, and we will visit you in jail to discuss your case.