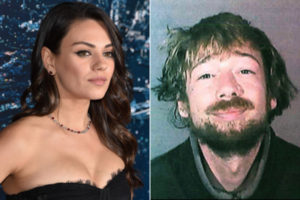 Stuart Lynn Dunn, who was placed in a mental health facility after being convicted of stalking actress Mila Kunis,  was recaptured four days after escaping from the facility. Dunn was found by members of the Los Angeles County Sheriff‘s department Major Crimes division, who had advised Ms. Kunis about the escape. Dunn escaped from the Pomona facility while supposedly taking a shower. When he took too long a caretaker investigated and noticed that Dunn had gone through a small bathroom window.

Dunn was originally  arrested in 2013, after being in the parking lot of a gym Mila Kunis attended three days in a row. He later broke into a condo that Mila Kunis owned and as a result pled guilty to one count of unauthorized entry. He was ordered to stay away from Mila Kunis for three years.  Dunn was found in an area known to be frequented by the homeless. When officers from Santa Monica stopped him the men from the sheriff’s department saw him with the police and walked up and asked him who he was. Dunn gave a fake name but his true identity was discovered anyway.

At the Law Offices of Arash Hashemi, we provide clients with passionate and experienced representation. If you have been charged with stalking or any other serious crime and would like to schedule an initial consultation with a lawyer at our firm, contact us by phone at (310) 894-8548 or contact us online. We promptly return phone calls and emails. Our office is conveniently located in the Westside Towers in West Los Angeles, within minutes of Santa Monica, Beverly Hills, and Westwood. We have flexible and weekend office hours, and we will visit you in jail to discuss your case.