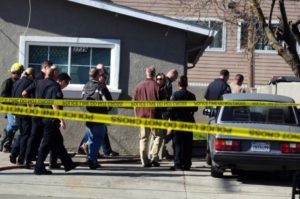 The trial of David Acuna, who is charged with the murder of a resident of Natomas, California, will begin April 29, 2015, in Sacramento. This murder took place in 2013 and the accused also faces arson charges as part of the indictment. The prosecutors are charged with proving Mr. Acuna stabbed Mr. Patrick Kendrick a man he knew. There was a confrontation over the selling of some electronics equipment. Mr. Acuna was allegedly in favor of taking cash but Mr. Kendrick offered him heroin instead. The police believe at the end of the negotiations Mr. Acuna stabbed Mr. Kendrick and then tried to hide the crime by setting fire to Kendrick’s apartment. This information came out during pre-trial proceedings.

Police did arrest Acuna and reported that he was badly burned, the police later questioned Acuna’s girlfriend about the fire as well and arrested her. The girlfriend of the accused has since taken a plea bargain deal from the prosecutors. She was charged and pled guilty to arson and use of an accelerant to start the fire. The defense attorney for Ms. Cabrera had challenged the legality of the interrogation of his client but the judge did not see it that way and subsequently she took the deal.

A California Defense Attorney must make decisions like this for the well-being of their client. In this case the motive may seem clear and the plea deal taken by the accomplice will make it hard for the man accused in the murder. His girlfriend’s attorney judged this to be the best avenue for her. Starting next week the attorney for the accused will need to decide how to move forward and make the best case for his client’s defense. Proper representation is a must for anyone that has been charged with a crime in the state of California to help with these strategies that can lead to acquittal or a reduced sentence.