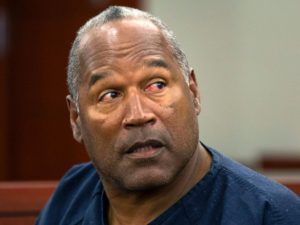 After serving nearly a decade behind bars, OJ Simpson could be released from prison based on the decision of his upcoming parole hearing on July 20, 2017. The 70-year-old former NFL superstar is currently serving 9-33 years in prison at Lovelock Correctional Center in Nevada. If the parole hearing goes his way, Simpson could see freedom as early as October 1st, 2017.
In 2007, Simpson was convicted of armed robbery, first degree kidnapping, and assault with a deadly weapon involving the holdup of two sports memorabilia dealers at a Las Vegas Hotel. However, in 2013, Nevada Board of Parole Officers approved Simpson’s parole request, citing the fact that he’s shown “positive institutional behavior”. The parole went into effect in October 2013 and since then Simpson has been serving the minimum term for four concurrent sentences for using a weapon during the 2007 robbery.

These charges are not related to the infamous “trial of the century” case involving the murder of his ex-wife, Nicole Brown Simpson, and her friend, Ron Goldman, in 1995 (on which Simpson was acquitted). Though Simpson had always maintained his innocence, the Brown and Goldman families won a wrongful death civil judgment against him in 1997.

Simpson, who is considered a “model prisoner” is predicted to have a favorable parole hearing and many are expectant of  his release in late 2017.

Concerning the 2007 incident, Simpson has stated, “My crime was trying to retrieve for my family my own property that was stolen from me.”

Under Nevada law, a person commits robbery (NRS 200.320) if he/she unlawfully takes property from another by force, violence or threats of injury and can receive 2-15 years in Nevada State Prison. The sentence is doubled if a deadly weapon was used [NRS 200.471], as in Simpson’s case. First degree kidnapping (NRS 200.310) occurs when someone willfully seizes, confines, or carries away another person with the intent to either:

• Hold the person for ransom
• Sexual assault, extortion or robbery
• Kill or inflict seriously bodily harm on the person

According to Simpson’s attorney, the ex- football star has received such a lengthy sentence for the 2007 incident because the Nevada Justice System was using it as a means of “payback” for the Brown/ Goldman murder in 1995.

Surprisingly, one victim of the robbery, Mr. Fromong, stated, “I told the district attorney at the time of his conviction that I thought he only deserved 1-3 years in state prison. O.J.’s done his time. He’s been a model inmate.”

If you or someone you know has been convicted of the following crimes: kidnapping, assault with a deadly weapon, and/or armed robbery, contact us 24 hours a day at (310) 448-1529 or contact us online to schedule a consultation. Our office is conveniently located in the Westside Towers in Los Angeles, within minutes of Santa Monica, Beverly Hills, Westwood, and steps away from the Expo/Bundy Station. We have flexible hours and weekend appointments, and we will visit you in jail to discuss your case.