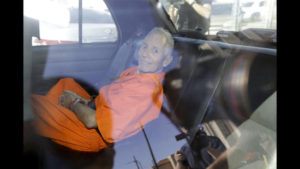 Robert Durst, the real estate heir and man suspected in his wife’s murder many years ago, is back in Los Angeles news after being arrested in Louisiana. He was arrested because a friend of his, Susan Berman, was found dead soon after Los Angeles police allegedly wanted to speak with her about Durst and any information she might have in his first wife’s disappearance in 1982. This is not the only time he was suspected in a murder – when living in Houston he was arrested in connection with the death of a neighbor.

The legal team has complained in Los Angeles County Superior Court about the arrest that was made in Louisiana. According to papers they filed his room was illegally searched and they found marijuana and a revolver. Convicted felons are not allowed to possess firearms in Louisiana, but only if convicted of certain crimes. Durst falls into the category that makes it legal for him to carry one. The FBI agents who did the search did not at that time have a search warrant for Durst’s room. On April 8, 2015, Robert Durst was indicted on gun charges in Louisiana. This will delay his extradition to Los Angeles for months, if not years.

In a bizarre twist that brought him back to the world’s attention he was heard in a documentary of sorts being made about his life mumbling that he did kill the people he has been suspected of killing. Surely these words that have been televised could make for grounds that will be the focus of his defense team for the current charges and those in the past.

A California defense attorney has to consider the law and what will best serve his client. Questions of illegal search and seizure or the reliability of recorded messages or film are looked into to make sure the police have not made mistakes in a rush to judgment about a person’s guilt. If you have an arrest warrant you need the help of an attorney that will work to make sure that all of your rights are upheld.