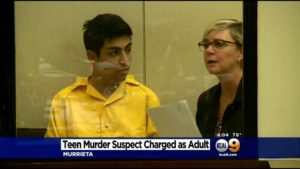 Ryan Jawad, has been accused of the murder of his friend Gage Seal in Temecula. The police found the victim and the accused at a motel after the shooting.  Jawad has had problems with the law in the past and will be tried as an adult. He is also a suspect in a number of burglaries in his neighborhood but the investigation is still pending. Jawed was previously arrested for possession of a stolen revolver. However, there is currently no weapons charge connected to the current charge.

If convicted Jawad could spend the rest of his life in prison. The checkered past he brings to trial may be inadmissible because he was a minor when those incidents happened. Jawad’s father said his son and Seal were very good friends and would often stay at each other’s homes. The motive for the shooting has not been determined yet.

His California defense attorney will do more than that to best serve his client’s interest. This is a heartbreaking case for both families involved, one young man is dead and the other is facing a life changing prison sentence. All possible strategies will be employed by his defense council to prevent a long incarceration.

At the Law Offices of Arash Hashemi, we provide clients with passionate and experienced representation. If you have been charged with murder or any other  crime and would like to schedule an initial consultation with a lawyer at our firm, contact us by phone at (310) 894-8548 or contact us online. We promptly return phone calls and emails. Our office is conveniently located in the Westside Towers in West Los Angeles, within minutes of Santa Monica, Beverly Hills, and Westwood. We have flexible and weekend office hours, and we will visit you in jail to discuss your case.