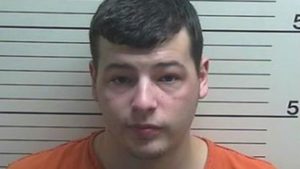 Online sites like Match.com, eHarmony.com or OkCupid have developed apps for people to connect and meet potential companions at the touch of their phone screen. It’s now the trendiest and most convenient approach for people in hopes of breaking the cycle of singlehood.

Tinder has had quite the reputation since its launch back in 2012. The dating app has been one of the premier hook-up apps for adults to find some short-term thrills, but also claims to be the catalyst for more legitimate relationships than any other dating platform out there. Even though they boast over 50 million users worldwide, the app is not is not meant for anyone under the age of 18, and certainly isn’t common place for the profile of an 11-year-old girl.

21-year-old Travis McAdams of Greendale, Indiana met a girl on Tinder, then pursued her through Snapchat. The girl claimed she was 16 years old but in reality was only 11. According to the investigation, McAdams met the tween at a local cinema where he put his arm around her neck, covered her mouth and forced her behind the building then proceeded to rape the 11-year-old.

In the state of Indiana, the age of consent is 16, so he could have been able to stay out of facing any legal woes had the encounter actually been consensual. Even though he was made aware of her age, he continued to rape her on several other occasions before the victim’s mother found out about the incidents.

Since news broke of this heinous crime, more victims with similar stories have come forward.

McAdams is being charged with ” rape and child molesting” by the Dearborn County District Attorney. Had this crime occurred in California, Travis McAdams would face Statutory Rape charges under Penal Code 261.5 and would also face Lewd Acts with a Minor under Penal Code 288.

© Copyrights 2021, Law Office of Arash Hashemi. All rights reserved.
Designed by Lav1
* Type a keyword then press Enter
%d bloggers like this: