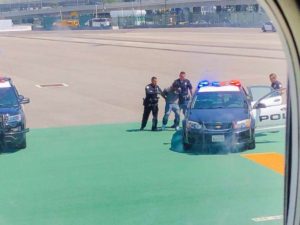 After the September 11 attacks, Americans spend extra time preparing for travel by standing in TSA security lines which make our airports safer for the millions of daily travelers. Thankfully, it’s a rare sight to see a security breech; and even the faintest whisper of a threat, or the slightest break of the TSA ‘rules’ and line formations could lead to serious fines and even jail time.

However, all the powers of the Transportation Security Administration were useless against a security breech for one Delta flight traveling out of LAX on August 27, 2018.

Twenty-three year old Luis Aguilar did what many of us wish we could do to avoid the, smelly feet, body scanners, conveyor belts, and slow moving lines that rival 405 traffic: He bypassed all security measures and climbed a fence on the border of Sepulveda and Lincoln and headed straight for a plane preparing for take-off at one of the world’s busiest airports.

It wasn’t exactly clear what this mentally ill man’s motives truly were as he approached a Delta flight. Passengers looked through their windows with a front row seat to what seemed to be a Hollywood thriller stunt. Aguilar both entertained and frightened passengers as he attempted to jump around the aircraft, hoping to touch the wings and engines.  He gave gawking onlookers quite a finale when he did pushups on the tarmac just before Airport Police Officers apprehended him.

Several flights were delayed while investigators and regulators cleared the scene of any further danger to inbound and outbound flights.

As the investigation of Aguilar’s antics are wrapping up, one thing is certain: under California Penal Code 601 this man will face felony trespassing charges. Most of us don’t see trespassing as a serious criminal offence, however, because Aguilar trespassed in a way that not only threatened business at LAX, but also put lives in danger to passengers and employees alike.

This ‘wobbler‘ crime may be charged as a misdemeanor or felony and may carry the following penalties:

If charged as a Misdemeanor-

If Penal Code 601 PC is charged as a felony, Aguilar can face

If you or someone you know has been charged with trespassing or a TSA violation, contact us 24 hours a day at (310) 448-1529 or contact us online to schedule a consultation. Our office is conveniently located in the Westside Towers in Los Angeles, within minutes of Santa Monica, Beverly Hills, Westwood, and steps away from the Expo/Bundy Station. We have flexible hours and weekend appointments, and we will visit you in jail to discuss your case.