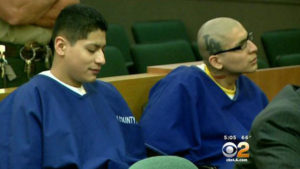 Two brothers have been sentenced in the murder of a third youth in 2013. The brothers had challenged the 18 year old victim Kevin Orlellana when he was playing handball as a possible member of a rival gang. The altercation that followed ended with Orellana being stabbed and the two brothers fleeing in a car driven by a third person, Michelle Pineda.

Anthony and Michael Caprio had originally pled not guilty to the crime of murder and Anthony was also charged with using a deadly weapon for the benefit of a street gang. The arresting officers were able to use messages on social media to help in their investigation. They also had charged Ms. Pineda for being an accessory after the fact. She has already accepted a sentence of two years for her part in the crime. She and her attorney had pled no contest to the charge which may have led to a lighter sentence.

The brothers are serving sentences from 15 years to life for the charges of second degree murder. Authorities have identified them as members of the Rockwood Street gang which can make a defense difficult even when the accused are so young. This type of crime is still an ongoing concern to authorities and anyone convicted of this kind of crime can expect a long sentence.

Any person accused of a crime is sure to need the help of an experienced California criminal defense attorney. Accepting a court appointed lawyer may not be good enough as to often they have too many clients to spend enough time on every person assigned to them. An attorney personally retained can spend more time and effort in keeping the sentence at a minimum and they can make a case for mitigating circumstances that a court appointed attorneys might have missed.